Upon viewing a piece of Tadashi Hayakawa's art I always have the feeling that something important, something central, is lurking just off the canvas. There is an earthy quality to all of his work, a gritty mixture of sand, water and the mess of life. But it is also familiar, something you feel you could have created yourself - had you continued painting with the same carefree vision of your youth.

Don't take that as a slight on his work. It isn't. As Tadashi said to me: "Imagination is more important than technique. The art has to express you." Who among us, with all of our responsibilities and pre-conceived notions of the world, expresses ourselves with the freedom we did as a child?

Tadashi isn't just an internationally respected artist who happens to live in Parker, Colorado. He is also one of the community's most valuable assets. The Mainstreet Community Center is a vibrant and busy place. Thanks, in large part, to Tadashi who gives freely of his talent and time.

Tadashi was born in 1941 in Tokyo, amidst World War II and a Japan that was changing drastically. To listen to him, the war does not appear to have had a very big impact on his childhood. He never mentions it in conversation and it isn't reflected in his art, current or past. 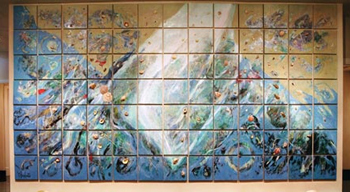 Tadashi's father was a furniture maker with aspirations of becoming an artist in his own right. But it was at elementary school, and at the studio of Toshiyuki Tanaka, that Tadashi’s dreams of becoming an artist came to life. The creative desire was further ingrained in him as he worked as a child actor from the time he was eight years old until he was fifteen. Then, at nineteen, everything changed. Tadashi made the decision to move to the United States to study art as a foreign student at Los Angeles City College.

During his initial years in the United States he studied and participated in projects and shows. He also married a fellow student, writer and poet Gina Valdez.

In 1969 Tadashi earned a Master of Fine Arts degree from Otis Art Institute. After graduating, he continued participating in projects and shows, but gradually he drifted away from fine art and began a successful career as a commercial / graphic artist. Commercial art, while challenging, left him feeling disconnected from his talent and his passion. He was busy managing people and clients, not feeding his artistic spirit. Eventually, this emptiness forced him to re-examine his life, his priorities, and his future. It was at this time that the man who believes in reincarnation decided to recreate himself and once again pursue fine art. This time around, Tadashi had years of life experience and could see more clearly the things he needed to focus on to be successful. 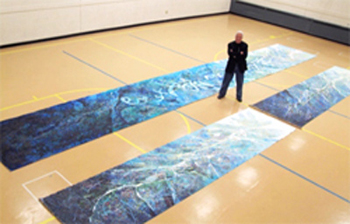 Tadashi Hayakawa's return to fine art was marked by the series of paintings and sculptures he calls ‘The Power of Spirit’. Doizaki Gallery, in Los Angeles, presented the one man show at the end of 1996. It was this show that put him on the international map. Tadashi spent a great deal of time studying the natural world - including the cellular level - to develop this theme. Tadashi also states freely that the birth of his daughter provided a great deal of inspiration for this period of his artistic life. By comparison to today's work, 'The Power of Spirit' is more concerned with shape and order. It is more constrained than his current work. But even in this early work there are flashes of where his art was going. Most notably in the paintings Joy of Life and Creation.

In 2004 Tadashi finished the 'Life In Ocean' series. This series is more a part of him than any of his other art. It is the perfect definition of him as an artist. "You can create commercial art that sells," he says. "But this makes you one of a million who do the same. Or, you can create to express yourself, regardless of the outcome. This makes you unique. There are too many fine artists that are happy being one of a million. For me, I prefer to be unique." It’s hard to argue with this. Van Gogh, Degas, Da Vinci – none of them knew wealth or fame during their lifetimes for their painting. Only the long reach of history has given them the respect and audience they deserve. Mostly, this was due to their steadfast conviction that art – their art – was about their vision and not some accepted standard of the day. Tadashi’s art conforms only to his vision.

'Life In Ocean' is that - the artist’s vision. It mixes paint on a canvas with objects from the physical world. It also has another of the defining qualities of Tadashi's work - size. Tadashi lets the subject and his vision dictate the size and technique used to create a piece of art. Pieces can range from a simple twelve inch square to a forty foot tall painting. (Stop in the Mainstreet Community Center and you are likely to find a canvas he is working on stretched across the wall or across a fair portion of the gym room floor.)

825 Art Gallery in Denver gave him a one man show for his work in March of 2005. Also in 2005, his work was displayed at the 27th International "Peace" Exhibition in Nagasaki Japan, and in 2006 at the 15th International Art Festival in Los Angeles. In 2007 he was asked to participate in three international exhibitions.

Today, Tadashi is part way through a series of work titled 'Dreaming of Life in the Heavens'. The current paintings are a departure from the 'Life In Ocean' series in that there is less use of materials from the outside world and more reliance on the brush. The same free-flowing style is still there, but the series focuses more on the ethereal rather than the natural. The first phase of this new series was Prelude. The current phase is Maturity. He expects the series to be finished sometime in 2010 and plans to show it at a gallery in Denver or perhaps in Los Angeles.

Upon moving to Parker, Tadashi thought he was retiring from art

Giving back to the community is Tadashi’s greatest gift to Parker. Aside from the works of art he has donated to the Town of Parker and other organizations, he gives a great deal of his time in the form of free workshops to aspiring or seasoned artists. At the Mainstreet Center he hosts workshops for children and the public in general. (Every third Sunday.) He has donated all of his art books to the Parker Library and has spent a great deal of time in Parker schools such as Pioneer, Ponderosa, and Cherokee among others. He is also very involved with the Parker Artist’s Guild. The one thing he would like to see more of are ‘Meet the Artist’ type events. Promotion of the creative culture in Parker is very important to him.

Upon moving to Parker, Tadashi thought he was retiring from art. “It turns out,” he told me, “to be the best move ever for my art, equal to moving to the U.S.”

You can view some of Tadashi’s work online at www.tadashihayakawa.com, the Mainstreet Center, or at Junz Restaurant, where Tadashi is the host.