He fell from a height unfathomable, gravity pulling at him as he flipped end over end and spun on some unseen axis. The red came at him impossibly fast. He banged into a plastic side, flipped over, banged again against the other side and finally hit bottom, bouncing a couple times before coming to rest, swallowed by the red. From the bottom he could see the light, the outside world, but all around was red. All around was home, the barrel. The glorious, beautiful, red barrel.

Moments later another came tumbling downwards. He, too, flipped end over end, banging the sides before coming to rest on top of him.

"Well, well," said the second, "look what we have here. After all of these years you come home. And a turncoat, no less."

"Sure you are. Look at you, brother, you’re as blue any I’ve ever seen. The enemy now, that’s you. So, all of these years you’ve been missing – now we know why. Little brother, Turncoat Blue chimp."

"That’s not the way it is. You can’t understand the horror. I’m not blue. This, this is just a cover, something they sprayed on me that hardened and stuck."

"You strayed from the barrel, brother. And you’ve returned one of those apes in blue. The shame of it!"

Turncoat Blue said, "I’m not an ape! Don’t you dare call me that. You don’t know what it’s like to be … lost. You can’t understand the horrors. I’m a chimp, like you, red through and through."

"Ten years," said Red, "is a long time. Tell me about it, brother, your traitorous ways."

Turncoat Blue sighed. "If I must."

"It all started when she had friends over. It started out normally. We were all arm in arm, the kids laughing and playing, us reds doing our best to beat the blues. You know, monkeys in a chain. Then the kids started laughing hard and throwing things. I got tossed, landed on an edge and bounced into a drawer, I think. She pushed stuff into the drawer later when cleaning up and I was pushed towards the back. There was a crack in the back of the drawer and eventually I fell through, stuck in the darkness under the chest of drawers. Just me, alone. She never thought to look, of course."

"You can’t imagine what it’s like, the solitary existence, the loneliness. I could hear everything, of course – monkeys joining arm in arm, leg to arm, children playing, you know – but in the darkness and away from everyone I was incapable of doing anything. I tried to scream out to you, I did. But no one could hear."

"The family moved to a new home and I was found when they moved the chest. But they didn’t put me back in the barrel, Red. They shoved me away in some box. More darkness then, and away from everything and everyone. There were strange smells in the box, things that shifted and made noises. And darkness, always darkness. Years of that, always being scared. One day the box opened, ‘So, you’ve lost two blue monkeys? I think we can fix that, even things out between the blue and red.’ It was the father, I think. He grabbed a spray can and covered me in blue. Blue! You can't imagine! They chatted for a few minutes, the father and kid, then I was tossed back to a new girl, a younger sister or something, and put in here. All of those lost years, drained of hope, kept in darkness and hidden away from the world. Now, when I’m finally rescued, they turn me blue." 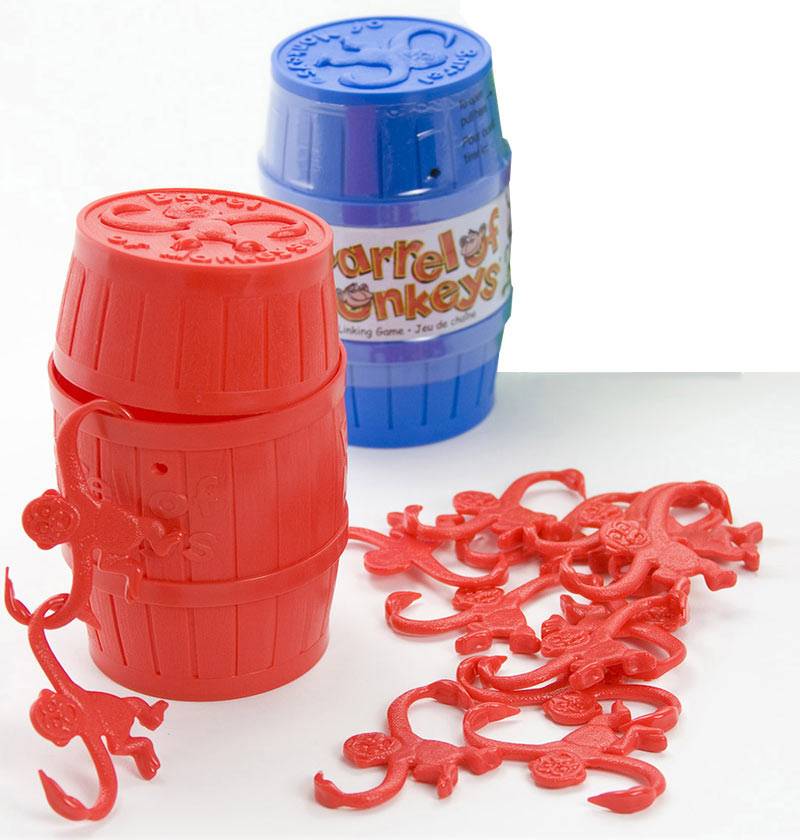 "The barrel won’t be kind to you, little brother. They don’t believe in fairy tales or misadventures. They aren’t as nice, the other chimps. They value loyalty and winning above all else. All chimps hanging in order, teamwork, no stragglers, no dead weight. And NO blues. Now they can’t strategize or practice. Not with a blue around. Not with a turncoat in their midst. You know this, brother. You know this."

"And it gets worse for you, my poor little Turncoat Blue brother, much worse. You know where you are, don’t you? Come now, brother, even ten years away from the barrel can’t get rid of that fear."

A loud, incoherent noise reverberated throughout the barrel. It danced down the sides and vibrated along the walls. Someone from the outside world was yelling. Red and Turncoat Blue shook from its vibrations. Clean up time.

Other monkeys showered down the barrel, one red after another, angry and vicious at having lost the day's battle to the blues. As each saw what lay on the bottom they screamed out in anger, a war cry that sent shivers through Turncoat Blue. One after another they fell, hooking arms and legs, adding weight to their anger and fury, all of it now directed at Turncoat Blue, all of it on top of him.

A momentary eclipse, the snap of the lid, then darkness. Complete darkness. A barrel of monkeys, angry monkeys, and their weight and hatred and anger pressed down on Turncoat Blue. The chimp could only whimper.

Before it began, Red said, "Sorry, brother, I wish it could have been different."

————
For those not familiar with the kid’s game, here you go: Click for link