Chaos Theory and the Tea Party

The Tea Party movement - essentially a creation of Fox News that now is receiving corporate news coverage - is filled with individuals screaming for government to get out of their lives. They are staunch conservatives. They abhor socialism, government intervention, and taxation of any sort. They insist that this country, the United States of America, needs to return to its Founders' original vision and values, as they interpret them. 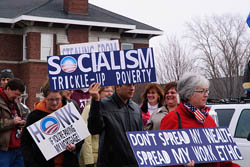 The Tea Partiers will scream at gatherings in every corner of america for lower taxes and less government control. They don't seem to understand that their current President — yes, the black man who really isn't an american — gave more than ninety-five percent of the populace (and almost all Tea Partiers) a significant tax break last year, thank you very much. Not one of the mainstream media outlets has run an article pointing out this very simple fact. The president has already cut taxes (to the poor and middle class).

The current rage amongst the Tea Party folks is healthcare reform. Amazingly, they are calling the president a socialist, a communist and a fascist. But here is the fact, healthcare reform is simply regulation of the insurance industry. There is not a national healthcare plan that has been enacted. There is no government run healthcare program similar to those in France, England and, well, everywhere else in the world. It hasn't happened. It doesn't exist. There is no "public option". The government will not be insuring any of us in the foreseeable future. And yet, the Tea Party folks insist that the current president and his administration are somehow defiling the american dream and taking away rights of hardworking people.

When the Bush administration allowed the energy companies to write the country's energy policy we didn't hear these same people complaining that there were fascists in office. (Isn't that the definition of fascism — direct ownership or collusion with big business by the government?) When the Bush administration ran up the greatest debt this country has ever known the Tea Party crowd was silent. They didn't complain then about taxing our children's and grandchildren's futures.

What do you suppose would happen if tomorrow we allowed the Tea Party supporters and their rich puppet masters to dictate our future. What if we said they were correct and the government would no longer support any social programs. Socialism in america has died. The Tea Party folks would rejoice for about twelve hours. There would be pandemonium in the streets. The celebrations would last through the night. All of the news stations would cover happy people dancing in the streets now that they had defeated "the government". The news organizations would interview their favorite rich conservatives who would call it a confirmation of everything that was right with america. They would interview their favorite fundamentalist christian who would also confirm that america had finally embraced God and now we would be able to get back to true christian values.

In the morning, of course, the story would change. Everyone one of them (us) would receive in their mail the following notices:

The average Joe-Tea Party lackey will have a 'come-to-Jesus' moment. Without Medicare and Medicaid his parents (the ones with diabetes, hypertension and gout) will die. They used to live on Social Security but now they will be sick and unable to work and find insurance. "I never realized Medicare was run by the government," he will be heard saying. His parents' few lingering months of misery will put Joe-Tea Party into more debt than he already is.

Without Social Security benefits seniors will now be out in the workforce looking for gainful employment. Will their experience out-trump the energy of youth? Either way, unemployment will skyrocket.

Military personnel will abandon the armed forces in droves. AWOL soldiers will be the norm, not the exception. Many of those who remain will refuse to go into battle. They will not be able to get insurance - life or health. Don't Ask Don't Tell won't seem so important then.

Our children will no longer get an education. No, they won't be able to be home-schooled. Joe-Tea Party (and the rest of us) will have to work as much as possible just to take care of his family and parents, and the small amount of taxes he paid before (that he now keeps) will not cover the costs to send them to a private school. The middle class will disappear under the burden of taking care of the old, the sick and their own.

Because the roads and public transportation are now privately owned by for-profit businesses their costs will far exceed any rate we may have paid in taxes. There will be limited usage because of the new costs. Following the laws of supply and demand prices will rise significantly for roads and transportation because so few people can now afford it. Only the elite will be able to afford to drive due to rising costs in road usage and petrol. This will contribute even more to the already sky-high unemployment rates, as GM, Ford and Chrysler will all be forced out of business. (The rich don't drive their cars.)

Welcome to the new America. We look just like Mexico. There are a few very wealthy people who control everything. The rest of us are poor with no education, no healthcare and, most importantly, no hope. Home of the Brave. Land of the Tea Party. But at last, at LAST, we have rid ourselves of socialism.