Occasionally I become a fitx-it guy. You know, the guy who sees something wrong, old, worn or broken, who has to grab a tool and tinker. This isn't to say that I'm mechanically inclined. I'm not un-inclined. It's just that most days I'm completely uninterested. Besides, I have to fix things like bad code in a web site design all day long so who wants to mess with the knob on a door at the end of the day. 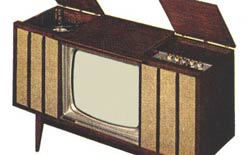 It takes a certain mood to tear something apart bit by bit and then reassemble it, having identified the problem and created a fix. I can't just see it and do it. It takes mental preparation, planning. It's far better to be able to just smack a thing and then see it respond positively. When I was young my grandparents had an old black and white television that was only occasionally in the mood to broadcast. Every Sunday we would drive to their place and all of the grandkids would play together while the adults sat around the kitchen table talking and preparing dinner. Later the kitchen table became the focal point of their penny-poker game while we watched the Wonderful World of Disney. If there was a Cincinnati Reds game televised or a boxing match on The Wide World of Sports the adults would invade the living room to watch.

Invariably, the TV would act up and my grandfather would walk over to it and smack it on the top. He'd wait a few seconds and when the picture had adjusted back to normal he would say "damn thing!" and walk back to his chair. It was an easy fix.

So here we are, 35 to 40 years later. My favorite laptop computer's monitor is going out and occasionally the screen fades out to a bunch of lines and illegible mumbo jumbo. The Apple store says the fix is $300.00. But it isn't my primary computer and I'm indifferent to having it in prime condition right now. I want to keep it and I do use it, but for now there is a work-around so I'm in no hurry. This sophisticated, modern machine responds quite nicely to a quick smack on the top.

So, I'm going to postpone my best impression of Carl the refrigerator repairman today. I'm not going to pull the thing apart myself and I won't be going to the Apple store for a new monitor. And when the screen on my laptop starts to fade in and out I'm just going to give it a swift tap on the top and watch the pixels realign themselves into a pretty picture, happy that there are still a few electronic devices that respond to my grandfather's smack on the top and a quick "damn thing!".