Stop That Train! The Little Bear

It’s an eerie but incredible feeling when your fourteen year old daughter takes the stage at one of the legendary bars in the west, the Little Bear in Evergreen, Colorado, on the fourth of July. She was invited to sing with local band BullMary and she made the most of the opportunity, captivating the crowd with booming, nuanced vocals that are way beyond her age. 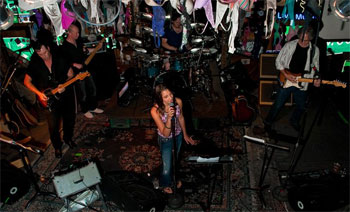 Over the years there have been a lot of talented and loved acts who have performed at Little Bear, including Willie Nelson, John Lee Hooker, George Thoroughgood, Bo Diddley, Rita Coolidge and many, many others. Local favorites like Opie Gone Bad and Firefall have also found their way to the stage, as well. Many up-and-coming bands trying to make their mark in the music world list the Little Bear on their website as an important venue they have played.

Little Bear’s is a history that goes deeper than recent rock-n-roll and country, too. Before its current incarnation it was known as the Round Up, which quickly became the Red Ram Night Club. The Red Ram Night Club hosted the likes of Count Basie, Duke Ellington and the Glenn Miller Band. And the building’s long history still contains remnants of its earlier lives and its wild west beginnings. At times it was a shop, a drug store and, some will swear, a bordello. Bras - countless numbers of them! - hang from the rafters and wires above the stage. Yes, even today, the west can be “wild”. 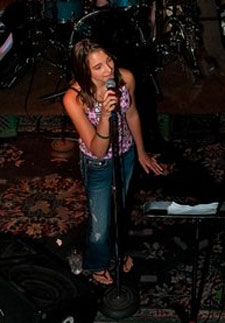 There isn’t a person who walks out of the place without understanding a bit of its history and place in the pantheon of live music venues. And the locals know and understand all of it. In fact, some of them have been around and attending performances since the Red Ram.

The truth is the Little Bear is still at the forefront of live music because it is a living history. Every week each act adds to its lore and contributes to its spirit. Some acts are better than others. Some go on to bigger things while others fade away. But taking the stage under the light of so much history forces the best out of them. In this way, the Little Bear feeds on itself, on its own energy and history, and on the expectations of those in attendance.

History is only part of Little Bear’s appeal. The sound is awesome. A lot of effort has gone into creating an environment that showcases the talent on stage, though you could never tell that when the place is quiet. The rustic ambiance belies its true nature, but it shines through the moment an artist hits their first chord.

By the time the kid is closing with “Rolling In The Deep” by Adele the crowd are already yelling for more. “Bad day for your singer to be out!” a man yells from the side of the stage as the song begins. But he is drowned out as soon as everyone recognizes the tune.

When she finishes she bows to the crowd and exits, literally, stage left to wild applause and cheering. It is impossible at fourteen to understand the magnitude of the opportunity, the chance to become part of Little Bear history. For her, it’s just a cool gig and the chance to do something new, a chance to perform with a great band behind her.

When she was born we lived a stone’s throw away from the Little Bear. We passed it by every day. But she won’t remember those days. Those are for her mother and me and neither of us ever dreamed of watching her perform here. Her days seem marked for the stage, under the lights, in front of the crowd. Who knows, if she’s lucky, works hard and remains passionate about it she may contribute one day to Little Bear history.

How cool would that be!

The photos above were courtesy of Dave Cameron, who had this to say: "Madison McDaniel totally ROCKED the Little Bear in Evergreen, receiving the only standing ovation Ive ever seen that crowd give anyone! Great voice!"