Uncle Bill, my dad’s brother, died recently. He had a massive heart attack around Thanksgiving and died of complications that began decades before. Bill was a fireman, retired, and had some scarring on his lungs from his years in the service that made his recovery impossible. 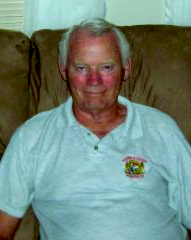 There are several things that always make me think of him, Christmas, for one. Every Christmas night we would go to Bill and Judy’s house and the entire family – some 12 to 20 of us, depending on the year – would gather in their family room in the basement. I loved seeing all of my cousins and family on Christmas night. It felt like the best way to finish off the holiday.

As a kid, I thought my uncle’s basement was filled with wonders. Neon signs from local bars hung on the walls. And then there were the mechanical toys. My uncle was known for keeping a crazy collection of battery controlled animals and cars. These were before wireless control and plastic injection molding. Most of the things had metal under pinnings and cloth hand-sewn around them. Each was programmed to do one specific thing. Everyone’s favorite was a monkey – complete with a red and white striped jockey suit – that would bang two symbols together when turned on. It was utterly obnoxious and loud. And its painted on mouth had a permanent smile that looked more like a scream, especially once you had heard its symbol banging madness. Yet, something about it got everyone laughing and smiling.

Other times my uncle spent his energy trying to convince us that he was actually the real life Archie Bunker. But his attempts seemed more designed to push our buttons than anything else, especially when it came to being a racist. I’ve known more than a few white racists and I’m certain none of them would have ever dragged a black man from a burning building and performed mouth to mouth CPR to save his life. Bill did that sometime in the 1970s.

Uncle Bill always seemed to enjoy life, especially his life. I can only speak as an outsider looking in, but he seemed to be one of the most contented men I’ve ever known. That’s not an easy thing to say and there aren’t many people I know that I can say that about. Perhaps it was just his easy going manner that made him seem that way. But even though I was clearly on the outside, an observer, it was the impression I had of him for many, many years.

All any of us can really expect in life is to love and be loved, to make an impact on the lives around us, and to be remembered in some way. Few of us are creative enough to pass a lasting work of art down to future generations. Most of us will never build empires or make history. We have only to pass a piece of ourselves down to those we love. Uncle Bill did that.

Bill had a mannerism that I see in others I meet. Every time I see it in someone else I smile and see my uncle in my mind’s eye. He would hold his hands out, palms mostly upward, right hand extended a little further than the left, with a knowing grin on his slightly cocked face and say: “All I’m saying …” And then he would hold you in his gaze for a few seconds, forcing you to shudder if you were twelve, frown if you were sixteen, and roll your eyes if you were non-believing and older. Even now it makes me smile. More importantly, it brings back fond memories of the man who etched it into my consciousness.

All I’m saying, here, is that Uncle Bill is everywhere, popping up without notice and always coming ‘round once a year whether I invite him or not. And I thank him for that.