The Winter Olympics are taking place in Vancouver, Canada. I find myself following events I wouldn't normally watch. Don't get me wrong, I would probably pay a bit of attention in the intervening years between Olympics, 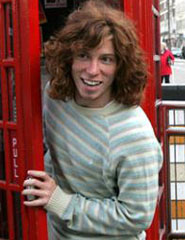 but television pays them no mind. For once, I'm happy to not be dating anyone at the moment. There is nothing worse than watching guys in sequins acting feminine. I'm not watching figure skating. I'm not watching hockey, either. There aren't any stories in hockey. Just a bunch of pros we already know. I like my Winter Olympics with a little unknown, with a little home-town humility and obscurity.

I'm a huge fan of Short Track Skating. I've followed Apolo Ohno for years, and I thought it was totally cool that he won the 'Dancing With the Stars' competition a few years ago, even though I did't watch the show. The guy would be a superstar in any other sport. Add to that the fact that the Koreans hate him and it makes for compelling TV, especially since there seem to be three of them in every race to just him.

Women's Downhill Skiing has been fun, too, if for no other reason than there are two american stars who are total babes - Lindsey Vonn and Julia Mancuso. Yes, they are great athletes, but the eye-candy is a factor in my watching. Two great looking women flying down what looks to be a dangerous mountain - with a serious chance to medal - what could be better?

Most of my Olympic reverence is saved for one guy - Shaun White. Has anyone ever had so much fun while dominating two sports? (He is also a Summer X Games Champ.) Tiger Woods doesn't have as much fun as Shaun White, neither did Michael Jordan. Maybe Magic Johnson did (always loved that about Magic). Lance Armstrong doesn't. What White does on the board is inspiring, and the fun he has with it is infectious. Look, everyone knows the skateboard crowd dances to a different beat, but Shaun White can pull everyone into it. The altitude he gets is mind-boggling. The McTwist and other acrobatics are jaw-dropping. It's easy to see why his competitors wait around to watch him.

After winning the men's Halfpipe he said he'd love to visit the White House. President Obama ought to accommodate him. He deserves it. He's made me - and everyone else who watched - remember that sport at its best is about fun. It's about being a kid in the snow and trying to one-up the next guy - and laughing with each other while you try. Sure, it's serious business (White make $7 - $9 million a year), but when a guy can remind us that it's also fun, that's a guy we all want to root for.