We Are The Crowd

Cultural change can be an incredible thing to witness and examine. This is especially so when the change is something you've been involved in, up close, and felt personally.

In 1974 as a young teenager living in Cincinnati I watched the World Cup at the Cincinnati Gardens. The games were shown on a movie screen on the basketball court with curtains draped all around. My mother managed to win a set of tickets from a local radio station and I got the thrill of my young lifetime.

The Netherlands were incredible during the tournament, smashing Argentina and Brazil on their way to the final against West Germany. I remember they looked to be the better side in the final, as well. But Neeskens and Cruyff couldn't get the better of Beckenbauer and Sepp Maier. The West Germans were playing at home in Munich and they took the crown 2 - 1. 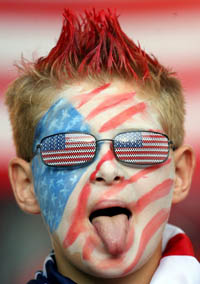 It seemed odd to be at the Gardens with all of those foreign voices. I was a clear minority in my own backyard.

It wouldn't be until 1982 that the first World Cup match was televised in the United States. That's an incredible statement given the tournament's immensity.

Today, 36 years after the West Germany World Cup, I sat in a bar in downtown Denver watching England and the U.S. battle to a 1 - 1 draw. The odd thing wasn't that I expected a good game. American soccer has made great strides and our guys play for some of the best professional clubs in the world. No, what was odd was to sit in a bar in the middle of the U.S., overflowing with people singing, chanting and cheering for one side tons more than the other. Hours before the match started — and I do mean HOURS — you could hear chants of "U-S-A, U-S-A, U-S-A" and my favorite song "Ole, ole, ole, USA, USA."

The crowd were so loud when the teams were shown on television before they came onto the field that my ears hurt. And when the players hit the pitch it didn't let up.

I can honestly say, as a veteran of several '70s and '80s hard rock concerts, when Robert Greene mishandled Clint Dempsey's shot and allowed the U.S. to draw level, I have never heard a louder cheer.

I asked several people around me before the game what they expected and I was consistently surprised by their responses. "I'll take a draw, but I think we can win," was repeated to me multiple times. Expectations were very high for the U.S. team, in spite of what the media might have told you. And there couldn't have been any doubt as to their allegiance. Most people were wearing a U.S. National Team jersey, with many wearing a headband and carrying flags.

The media will have you believe that soccer doesn't matter in the U.S., that it never will. But the media like this story because the game doesn't fit into the American Consumerism mould. There are two halves with 45 minutes of uninterrupted play. No TV timeouts. No breaks on the field. In the U.S. the media can't sell the sport so it continues with its "soccer isn't important" mantra. The corporate shills can't find a way to take over the game so they want you to believe it — the game — doesn't matter. In fact, they will tell you that hockey is the fourth major sport in America, even though soccer has gotten better ratings on television for several years now.

Fado's is in downtown Denver, across from Coors Field. It is filled with Guinness, wide screen TVs in every corner and, on this day, it was filled with fans screaming and cheering for the U.S. National Team on the world's biggest stage. But Fado's was not unusual or unique. Several friends have told similar stories from other places throughout town. There has been a shift in our culture, in spite of what the media say. Football does matter. It is relevant. And it's here to stay.

You don't find groups of eight or nine showing up at an Irish pub at 7:30 in the morning to make certain they get a seat for a 1:30pm game, nor do you find women screaming for a yellow card after a bad tackle, unless your football culture has progressed beyond the "soccer doesn't matter" meme.

At the end of the match I turned to one of my English friends who smiled and said, "After more than 15 years of living here I never thought I'd see this. I feel like I'm in a pub in London."

England go ahead in the fifth minute of the game and then try to protect what they have. But that isn't the U.S. style, is it? We are a nation that always wants more. We are tied to consumerism as tightly as the Italians are tied to pasta and the English to tea. The beauty — and the treachery — of American soccer is that we won't sit back and defend, defend, defend when leading. If we're one goal up we want to be two up. And we play like it. That's who we are. We started with so little a short time ago and we have moved to the point where our culture now shows through on the field. If the American culture isn't about never giving up and always searching for more then how else do you describe us? Forget the merits of those traits and whether you like them or not. They are us. And they are reflected in our play on the pitch.

Regardless of how the team ends up in this tournament, it is exhilarating to watch how grown up we've become about the sport and our place in it. We now demand excellence. We expect it. And, whether the media like it or not, we are no longer a single voice in a large crowd. We are the crowd.