Against my better judgement I agreed to set up some sort of booth at a local leadership conference. My opinion of these things is pretty low, having been forced in the past to attend a few. I can tell you leadership conferences are generally attended by people following orders to attend and hoping to escape their cubicle confines for a day or two. At best attendees can be found on the sub-mid-level management rosters of many Fortune 100,000 companies. At worst they are unemployed and thinking of starting their own business with no money or actual plan.

I put the odds at precisely one million to one that I would get any business out of the deal. But such is the designer’s life - crappy hours, clients who know everything and nothing, including how to do my job, and hours spent jerking off at meaningless events for the sake of “marketing”. Oh, well. It beats being a sub-middle-manager somewhere in a cubicle. There is that.

The first day didn’t disappoint as I spent two hours talking to my friends Thomas and Arlene. Arlene is an accountant and had a booth next to mine, and by booth I mean folding table and a chair. Thomas sells financial services or something like that and though I have assured him many times that I don’t need his services, because I have a teenage daughter and she knows best how to spend my retirement, he still persists on asking for money and offering advice.

Late on the second day I was feeling a bit grumpy. This was mostly due to the fact that I don’t like convention halls, have an acute allergy to boredom, and refuse to become a member of the Starbucks or McDonalds coffee clubs.

Wandering down the mostly vacant aisle towards us was the perfect cure to my maladies. The guy in question clearly thought he was better than all of the vendors as he raised his nose and gruffly said “Not interested” to anyone who tried to speak to him.

“Look at this guy,” I said to Arlene and Tom. “He was just promoted to some minor management role at one of the local franchises for who-knows-what.” 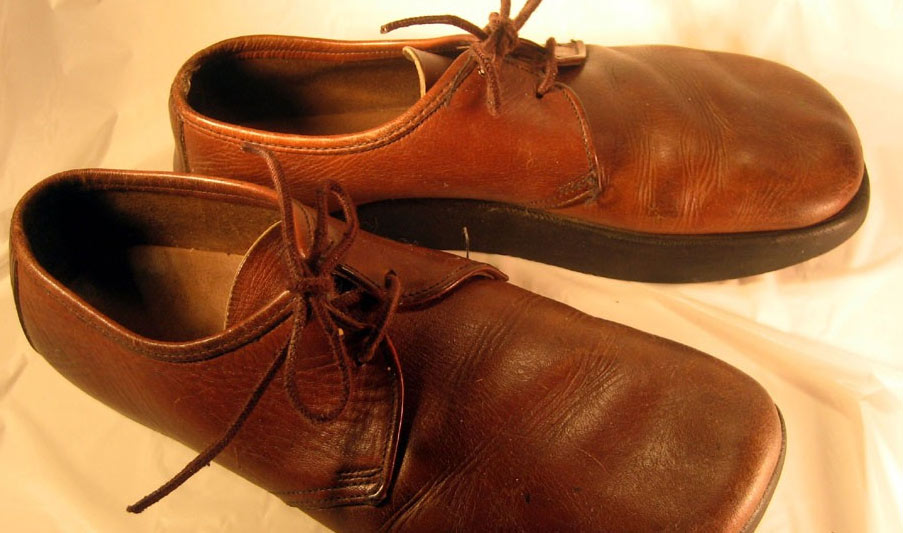 "That shirt is way too big on him and he wears it that way to try to hide his fat gut. But it just makes him look like a fat guy wearing a tent. And what’s with those pants?” I asked. “They’re like four inches too long and bunched up around the ankles. I bet he has a pair of earth shoes in his closet at home and he wears those loafers only on important days.”

“What?” asked Arlene. “Jack, you’re nuts! Nobody owns earth shoes today, do they?”

Here’s another observation since I’m on a roll and trying to see life as this guy. He’s the guy everyone told me I should be. No shit. After college I was offered a job as an account rep for Reebok. It was an independent contractor position and paid commission only. My entire family found this was one area where they were in a position to give unsolicited advice. Here’s what they said: “Get a good job with a steady paycheck and benefits.” They were adamant that this was the pathway to success.

When I said no, thank you, they were indignant and angry. Hmm.

Except my father who gave me one bit of wisdom I’ve never forgotten. “I know two things. If you want make anything of a career you have to work for someone willing to pay you what you’re worth - commissions. Or, you have to start your own business. Workin’ for the Man usually only makes him rich. Look at me.”

Some people are motivated by titles and security and I get that. If it makes them happy then bully for them. But that isn’t me and I don’t like it when they try to lord it over me, like somehow they’re better than me because they know how to settle, because they are willing to live within puny boundaries with visible horizons.

Anyway, Arlene walks back to her folding table and chair as the guy comes her way. “An accountant,” he says. “Well, we use one of the big firms.” He turns his nose up walks in front of me. And by now, you might have guessed, I’m a bit peeved.

I cock my head at the question and reply, “I make pretty things that speak to people.”

The guy looks at me, all serious-like, and says, “What does that mean? All I see are some brochures and a crappy powerpoint that I could have done in fifteen minutes when I was a Junior Associate.”

I smile, but only a little bit.

“I believe I was pretty clear and I am certain english is your first language. I make pretty things that speak to people.”

The guy looks at me for ten seconds with his condescending almost-middle-manager stare and then says, “You’re weird.”

“Perhaps. But that’s really dependent upon your definition of weird. I mean, sitting in a cubicle for ten hours a day counting hours on time sheets thinking you are on your way to “making it”, now that’s weird! Or, speaking of making it, locking yourself in a closet with your mate and doing it while one hand is handcuffed to hers with a fistful of hair in the other, now that would be weird. It might be interesting, at least, but still weird, I think."

“You are weird. What’s your job title?”

“Of my business, of course.”

“So, what, you’re one of those weird art guys?”

“Again, it depends on your definition of weird.”

“I have a dick but I’m not certain you could say I am one. Though it is an interesting thought: going through life as a dick, a super-sized penis.”

“Well, get in line. Would you like a number?”

“A number for what?”

“For the line to bitch me out and tell me how much you don’t like me. It forms outside. With a number you are pretty much guaranteed to get in and bitch at me.”

“It’s not official if you don’t have a number. And guys like you who count hours on time sheets like to be official.”

“I’m going to lodge a complaint about you.”

“That’s fine. I’m head of the complaints department. If you would like to fill out a form I will see that it gets to me for review.”

“I believe you established that a few moments ago.”

“I don’t think I’ll be doing any business with you. You probably aren’t any good anyway.”

“Probably,” I said. He turned to walk away. “Would you like that number? You know,” I called after him, “you should have worn the earth shoes with those pants.”

He turned, “I don’t own ...” he paused, sputtered, stalled, then he turned and stormed out.

I turned to Arlene and Thomas, both of whom were rolling on the floor like a couple of fourteen year old mid-seizure epileptics.

“I told you he owned a pair of earth shoes.”